Once a weed, now a new source of forex

Over the years water hyacinth has always been considered merely weed choking lakes and water bodies, but this free-floating natural plant has opened up a new era as raw material for export-oriented handicraft industries in Bangladesh.

According to the data of Bangladesh Handicrafts Manufactures and Exporters Association – BANGLACRAFT, small-scale industries have mushroomed to make various crafts being exported overseas and providing employment opportunity for thousands.

At least 50-60 types of products are made using water hyacinth including basket, table mat, note book, toys and gift items, which have a big demand in America, France, Spain, Germany, Ghana, South Korea, Taiwan and Kenya.

The association president Golam Ahsan said the country has capacity to earn Tk 20 to Tk 30 crore yearly while nearly 1 lakh people will find jobs in this sector within several years.

Vietnam, China, Thailand and Indonesia are key players in the global market saturated with products based on water hyacinth.

$ 60,000 to $ 70,000 made from water hyacinth per year and is planning to display its manufactured items in fair to be held in Japan, Germany, America and Hong Kong only to draw buyers’ attention.

“Last year we received order to make 30,000 pieces of flower vase worth nearly $ 1 lakh from a US client through our quality products much the same as those of dominant players with comparatively affordable prices,” said Eco Bangla Director Md Sabuj Hossain.

Handicraft industry mushrooming across the country

The entrepreneurs of jute-based handicrafts are turning to water hyacinth to produce the same products as orders are pouring in from their clients.

As the echo-friendly products from hyacinth are very handy and much-sought-after abroad, industries have come into being in Gazipur, Barisal, Madaripur, Jessore, Sylhet, Mymensingh and Gaibandha.

Of them, Jobarpar Enterprise at Barishal, a production unit of Prokritee, Ana Fashion at Madaripur, Kochuri Bazar at Jessore and SD Handicrafts at Gaibandha are notable.

Ana Fashion Proprietor Nargis Ahamed said she used to produce handicrafts from jute but before the Covid-19 hit the country she received order from Spain, Korea, Ghana and Kenya for crafts based on water hyacinth.

“Already I have received order worth nearly Tk 45 lakh,” she said.

A Gaibandha businessman Subas Chandra Barman, owner of SD Handicrafts, narrated his experience of how he grew as an entrepreneur.

“I came to the sector leaving my job after I had sensed a huge demand for hyacinth products overseas,” he said.

Mr Barman explained that he buys hyacinth for Tk 50 to Tk 70 a kg from locals and make products worth nearly Tk 10 lakh to sell per month. Some 307 people are employed in his business.

Entrepreneur Saeed Hafiz who owns Kochuri Bazar, a handicraft-producing house, said water hyacinth is a great substitute for jute and all jute-based products can be made from the flowing water weed.

“Nearly 1500 products are possible to be made from the aquatic plant. I am currently producing indoor tub, ladies side bag, glass mat, ornament box, fruit bowl, penholder, and planning for furniture and plate soon,” the Dhaka University graduate said, adding that he has already received order from Australia, Sweden and France.

So far the naturally growing water hyacinth is used to make products, but entrepreneurs are planning to cultivate the plant commercially or preserve it with a view to using all the year round as many entrepreneurs are facing shortage of raw materials to meet the soaring demand from foreign clienteles. 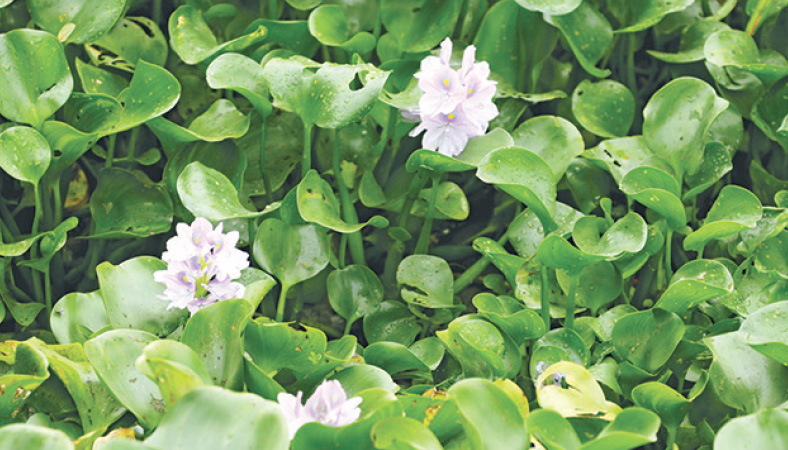 Ana Fashion’s Nargis said she is mulling cultivation of water hyacinth in five acres of land at Kalkini in Madaripur alongside bringing unused ponds and small lakes in the locality under the same purposes.

The Eco Bangla Jute Limited director echoed the same as Nargis. He said as the demand for products is on the rise, so is raw material.

Big companies are gaining an upper hand over the small ones when it comes to displaying products in the market.

Some entrepreneurs alleged that opportunities for them to showcase products during fair are very slim, thus depriving them of having any level playing field.

A Mymensingh-based handicraft enterprise Bimurto that used to make products from water hyacinth is now shut failing to sell products.

“We were doing well in the business but failure to avail opportunities to exhibit crafts during fair has brought my business to the knees,” said its proprietor Wafi Islam.

While sharing his bizarre experience with this correspondent, the entrepreneur said he employed at least 77 women to manufacture crafts while there were four showrooms in Dhaka – all are shut now.

“These are just memories. Now I am employed at a private company,” Wafi said, adding that they presented the issue to the BANGLACRAFT, but to no avail.

“There is no opportunity for us to display handicrafts. If we are given chance, we will do better in the business,” he said.

Chairperson of Small and Medium Enterprise Foundation Md Masudur Rahman asserted that steps are underway to provide entrepreneurs with technical support and diversify their products.

Asked about discrimination facing the small entrepreneurs in product display, he said: “We arrange fair with a view to bringing craft manufacturers and buyers on the same platform. If any entrepreneurs complain of discrimination, we will take action to ensure level playing field.

Bangladesh Agricultural Research Institute’s Chief Scientific Officer Md Mohi Uddin Chowdhury who conducted research on water hyacinth and wrote articles on it in dailies opined that this free-floating plant can grow in any environment and be a good source of organic fertilizer.

Khulna University Prof Md Nazrul Islam who has been conducting research on water hyacinth since 2004 said it is possible to make paper craft from water hyacinth which can be used for making many handicrafts.

“There is a huge opportunity to grow small and medium industries across the country based on water hyacinths. Besides, this water weed plays an important role in increasing crop fertility,” said the researcher.