Prime Minister Sheikh Hasina on Tuesday called Bangladesh the most ideal place for investment in the world, seeking larger foreign and local investment for mutual benefit.

"Bangladesh is the most ideal place for investment in the world as we offered maximum investment opportunities. So, I hope overseas investment will come here and local people will also invest in their own country," she said.

The prime minister said this while inaugurating the Bangladesh Special Economic Zone (BSEZ), also know as Japanese Economic Zone, in Araihazar of Narayanganj district on the outskirts of the capital.

She joined the function virtually from her official Ganabhaban residence here. 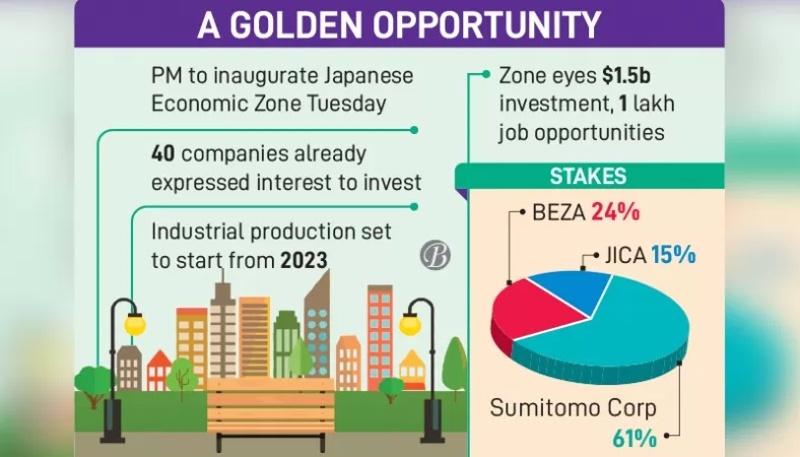 The premier mentioned that Bangladesh could be a market of 300 crore people with 17 crore of its own, 50 crore in east, 150 crore in north and 50 crore in west due to its geographical location, reports BSS.

The different countries of the world can invest in Bangladesh largely to reap benefits of the vast market, she added.

She also said that her government has attached topmost priority to planned industrialisation alongside agriculture by protecting the country's environment and arable lands.

The economic zone would draw investment of over 1.5 billion USD once it goes into full operation while it has generated employment of over one lakh people initially.

The vision to establish an EZ dedicated to Japan began in 2014, when Prime Minister Sheikh Hasina visited that country.

Japan International Cooperation Agency (JICA) undertook the initiative to conduct the feasibility study in 2016. Later in 2019, Sumitomo Corporation from Japan inked the deal with the Bangladesh Economic Zones Authority (BEZA) to develop the BSEZ.

Renowned companies like Singer have already started construction of their infrastructures at the economic zone while an agreement has also been signed with German company Rudolf.

Agreements will be signed with two more Japanese investors after the inaugural programme, while 30 more Japanese firms and 10 other firms of different countries have shown their interest to invest in that economic zone.

Land acquisition to set up the Japanese Economic Zone-2 have been completed while a proposal is also awaiting nod from the Cabinet Committee on Economic Affairs (CCEA) for setting up another special economic zone dedicated to the Chinese investors.

The government has requested the Japan International Cooperation Agency (JICA) to set up skilled development centres at Araihazar in Narayanganj and at Mirersarai in Chattogram.

In the countrywide five economic zones, till date, some 177 investors have made an overall investment proposal of $22,173.177 million aiming to create employment opportunities for some 8,16,541 people.

Besides, around $4 billion has already been invested at the private economic zones creating employment opportunities for some 35,000 people.

The industrial park will get a dedicated one stop service (OSS) centre and a skill development centre.

Ambassador of Japan to Bangladesh ITO Naoki and President and Chief Executive Officer of the Sumitomo Corporation Group Masayuki Hyodo spoke at the function.

The BEZA executive chairman gave the address of welcome.

A video documentary on activities of the Bangladesh Economic Zones was screened on the occasion.