Experts warn over loss of fish species from Halda River

Climate change, development projects and pollution are causing fish species to disappear from Bangladesh's Halda River, according to experts who call for action to restore the river's biodiversity, upon which local people's livelihoods depend.

In 1978, US fisheries scientist Walter Rainboth reported 65 species of fish in Halda river, which is Asia’s main breeding ground for carp. But, by 2016, a study funded and published by the Ministry of Fisheries and Livestock and conducted by the Bangladesh University of Engineering and Technology, Bangladesh Agricultural University and Chittagong University found just 50 species. The lost species include the humped featherback, mud perch and giant river-catfish, as well as the banded gourami, giant mudskipper and yellowtail mullet.

Researchers who took part in the 2016 study say, the main reason for these losses is a dramatic increase in the river’s salinity in recent years. Saline water enters the Halda because it is a tributary of the Karnaphuli river, which flows into the Bay of Bengal. Twice a day, the sea’s high tides raise the water level by up to 4.5 metres, reaching as far inland as the Halda.

But as sea levels rise and cyclones become more frequent, thanks to global warming and climate change, greater amounts of seawater are entering the Halda. Meanwhile, upstream dams and irrigation projects are reducing the river’s flow, diminishing its ability to dilute the saltwater.

The World Health Organization (WHO) defines ‘fresh water’ as having no more than 300 milligrams of salt per litre. But data from the Chattogram Water and Sewerage Authority shows how the average salinity level in the Halda River shot up to a record high of 2,385 milligrams per litre in 2007. That was the year that the devastating Cyclone Sidr struck Bangladesh. Since then, salinity has remained relatively high, only dipping below the WHO standard for fresh water in two of the following years. When Cyclone Yaas struck in May 2021, the salinity level rose to 3,690 milligrams per litre.

The saline water is seeping into land near the river, but salt is poisonous to most crops and many farmers have lost their livelihoods as a result. Some have turned to rearing buffaloes as the salt-tolerant grass these animals eat is among the few plants that can survive.

“Arable land can no longer be cultivated,” says Abu Tayab, a farmer who used to be able to grow crops including brinjal, gourd, red spinach, watermelon and melon on land close to the riverbank. “Crops are wasted in saltwater.”

Aminul Islam, another farmer, says that if the saline water can be prevented from entering the lands through the embankment, agriculture could return to those areas. “In our childhood, we had three seasons of paddy [rice] cultivation,” he says. “Watermelon, melon, cucumber, potato, radish and other crops were also cultivated in the land on the bank of Halda. But now there is no cultivation in wide areas of land.”

While the salt is coming from the sea, its reach into the Halda is aided by what is going on upstream. Md. Manzoorul Kibria, who leads the Halda River Research Laboratory at the University of Chittagong and took part in the 2016 study, says tidal water regularly enters the Halda because so much of the river’s freshwater has been diverted for the Kaptai Hydropower project and to irrigate farmland. 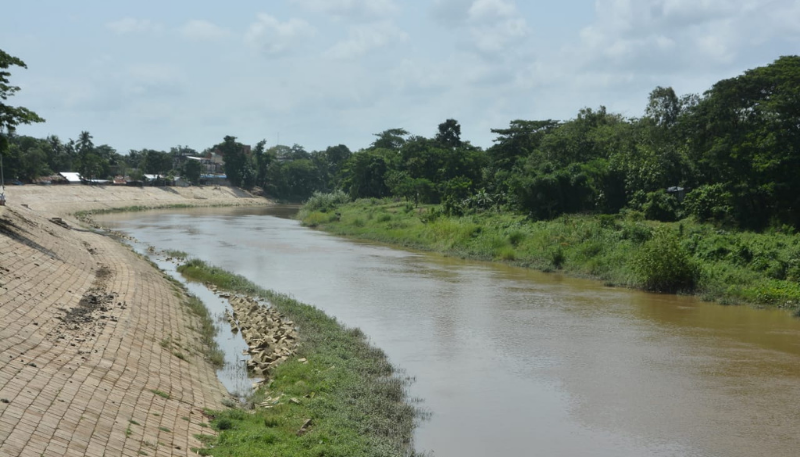 In 2012, for example, a 4.5-metre-high rubber dam was installed on the river at Amtali, in the Bhujpur area. Kibria says that during the dry season, this dam reduces the volume of water in the Halda by about 20 per cent. As a result, he says, between December and March a 20-km downstream stretch of the river dries up.

“The production of plankton and benthos, the main foods of the fishes, decreases drastically due to lack of water flow”, he says, adding that this food crisis occurs just before the time of fish spawning.

Another rubber dam has also been installed on the Harualchhari stream that flows into the Halda. These dams provide water to tea gardens and rice fields, but in doing so they deprive the Halda of fresh water. A concrete dam on the Dhurung tributary has deepened the crisis. Poorly planned sluice gates have also been installed at the mouth of 18 of the 19 streams that flow into the Halda, hindering the free movement of fish and reducing the flow of water from upland areas.

Ranjit Barua, a resident of the area adjacent to the Amtali rubber dam, said that before the dam was installed, the water flow was good and many fish could be found in the river and its tributaries.

“[Recently] the river at the rubber dam dried up,” he says. “As a result, no fishes can be found there. Although the rubber dam was set up to increase agricultural production, farmers are not getting the [expected] benefits.”

Barua says, local people would support a movement to remove the dam.

Another issue facing the fish species of the Halda River is that, between 1905 and 2002, the river has been artificially shortened by more than 25 km through the cutting of its curves to straighten the channel. This has further reduced the river’s capacity to carry fresh water, exacerbating the intrusion of saltwater from the Bay of Bengal.

Kibria says human activities in the Halda have affected the spawning of carp species known collectively as Rui. Local people harvest the eggs of these fish to stock aquaculture ponds in which they raise adult fish for sale and home consumption. Whereas 136,000 kg of eggs were produced in 1945 and 47,000 kg in 2001, the harvest plummeted to just 8,000 kg in 2021, says Kibria. He adds that Bangladesh used to export live fish fry from the Halda to India and Myanmar for use in aquaculture, but now it is not even possible to meet Bangladesh’s domestic demand.

In a bid to protect the carp fishes of Halda, the government, in 2007 and 2010, declared two 20-km stretches of the river upstream from Madunaghat as a sanctuary. But, beyond this, no effective measures have yet been taken to protect the river’s biodiversity. 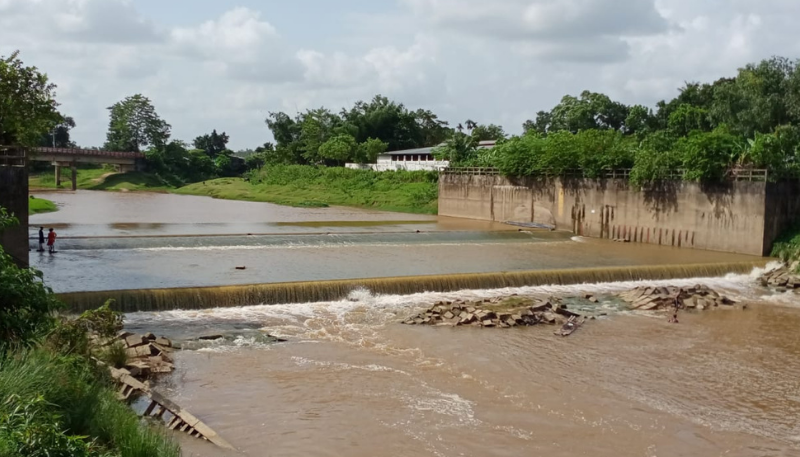 A ban on fishing, which the government introduced in 2010, has alienated local fishermen like Bishu Jaldas who used to catch squid, fish and shrimp.

“Now that fishing is off, we are deprived of all these,” he says. “The fishermen are leaving their jobs and working as day laborers. The future of our children is also uncertain.”

Another fisherman Ratan Jaldas describes how, in the past, he would go fishing at places where the branches of trees dangled into the river.

To protect biodiversity, say Kibria, the natural flow of freshwater into the river should be ensured, while the entry of saline water with the tide should be reduced. He recommends increasing the water-holding capacity of Karnaphuli River, which flows between the Halda and the Bay of Bengal, by by dredging its channel to deepen it. This would ensure less saline water would reach the river, he says.

Kibria points out that the 2016 study published by the Ministry of Fisheries and Livestock recommended that the Government of Bangladesh remove both the dams on the river and on Harualchhari canal.

“It was also recommended to cultivate vegetables that require less water in the dam area, and to rehabilitate the tributaries that have unplanned sluice gates, to ensure free movement of fish along the water,” he says.

Despite this, the recommendations have not yet been implemented. But according to Mominur Rahman, Deputy Commissioner of Chattogram, change is on the way.

“In a bid to conserve the river, the government is to form an independent organisation named Halda Management Authority,” he says. “The authority will implement the recommendations of study and look after the wellbeing of the river.”

(The story is supported by Earth Journalism Network)