Most of the capital market listed companies with ample reserves appear unwilling to pay higher dividends to their shareholders, arguing that it will impede their future investments.

Until September this year, there are 33 companies with reserves of over Tk 500 crore each at the Dhaka Stock Exchange. But only nine among them distributed cash dividends between 100 to 600 per cent (including multinationals) for the last three financial years.

Other companies had given only 5 to 50 per cent. Capital market analyst and former professor of Dhaka University Abu Ahmed told The Business Post that the reserves are the investors’ money.

“This money is kept as Fixed Deposit Receipt (FDR) in the bank or the company uses it as working capital. It’s not a bad thing. Paying higher cash dividends will encourage investors to invest more,” he said.

Tapan Sen Gupta, deputy managing director of BSRM, told The Business Post that without a healthy reserve, a company would have to take bank loans for new investments, which would push up its liability.

“Investors won’t want the company’s liability to increase. So even if the dividend is a little less, it is better to keep a large amount of reserves in hand for the company’s future,” he said.

He noted that paying high dividends will benefit the company’s sponsors, who hold the majority shares, compared to the general investors.

Reserves remain unutilised, mostly Walton Hi-Tech Industries, which has the highest reserves at Tk 7,631 crore, got listed on the stock market last year and distributed 200 per cent cash dividends.

Square Pharmaceuticals has the second-highest reserves with Tk 6,702 crore, but it distributed lower cash dividends than Walton.

A Square Pharmaceuticals official declined to comment when asked about lower dividends despite high reserves, saying it “price-sensitive information”.

He said a high reserve would benefit the investors more.

Titas Gas, holding the third-highest reserves with Tk 5,895 crore, distributed 26, 26 and 25 per cent dividends in the last three fiscal years, respectively. The company did not immediately respond to The Business Post’s requests for comment.

Beximco is paying only 5 per cent dividends, the lowest, for the last three years, although it has a reserve of over Tk 5,000 crore.

Even though the company is giving out low dividends, it is not utilising the reserves for investment. When Beximco Pharma started acquiring Sanofi Bangladesh with Tk 480 crore, it took a Tk 375 crore loan from Agrani Bank.

Grameenphone (GP) and British American Tobacco Bangladesh Company (BATBC) are in fifth and sixth positions with reserves of Tk 3,122 crore and Tk 2,868 crore respectively. While GP paid 275 per cent cash dividends, BATBC gave out 600 per cent.

BATBC has announced to invest Tk 515 crore in two phases for factory expansion to get export opportunities. It will provide most of the funds from its reserves. 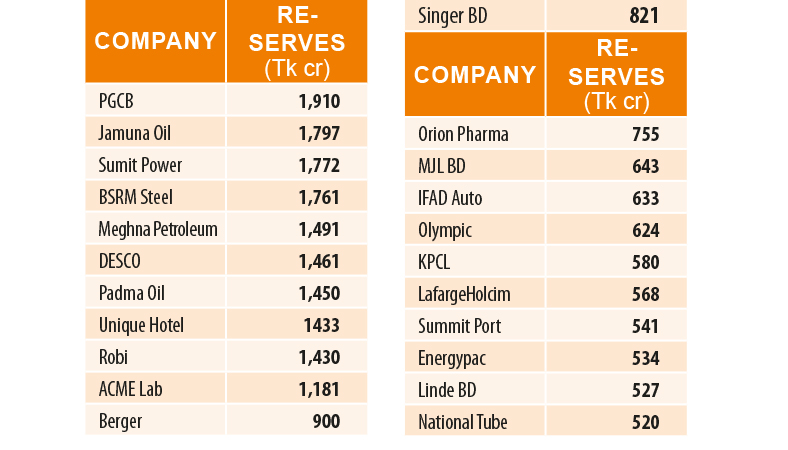 Former lead economist of World Bank (Dhaka office) Zahid Hussain told The Business Post that companies should use their reserves if they have an investment opportunity.

Professor Abu Ahmed said that in developed countries, companies distribute reserves among their shareholders. “Companies here hold on to the reserves so that they can properly pay dividends,” he said.

He noted that even though Bata Shoes incurred a loss of Tk 97 per share last year, it announced to pay 25 per cent cash dividends.

Reckitt Benckiser (Bd) is a good example in the capital market to give higher dividends with low reserves. According to DSE, the multinational company distributed 1,400 per cent cash dividend last year with only Tk 77.5 crore reserves.

“Multinational companies focus more on taking dividends out of the country. They want to keep the investors happy with huge dividends. Their public share is very nominal,” he said.

“Multinationals are not interested in contributing to the economy by creating employment opportunities through new investments. But domestic companies have large reserves because they are more focused on increasing investment and employment,” the official told The Business Post.