After securing a big victory against Papua New Guinea to beat away the ghosts of elimination and seal a Super 12 spot on Thursday, Bangladesh skipper Mahmudullah Riyad arrived at the post-match press conference to face the media.

He literally faced the music three days back, when the Scottish team were heard singing and celebrating during Mahmudullah’s press conference which forced him to take a pause, following a six-run win against Bangladesh.

Heavy criticism was shot at them after that defeat as the Tigers, who were the favourites to go through from group B of the preliminary stage, were at risk of elimination. The Bangladesh Cricket Board President Nazmul Hasan had openly criticized the team’s intent and approach after that defeat, and fans were not holding back either.

After the win that secured qualification, Mahmudullah arrived at the press conference and looked stiff as he answered the questions from the media. Once told that he looked stiff, the Bangladesh skipper replied, “I should be stiff. In the last few days… It’s okay. We are also humans. We also make mistakes. We play for the country. Everyone has expectations, and I don’t think nobody has feelings about it more than us. There will be criticism if we lose. But you cannot belittle someone for that. It has been done from every aspect.”

It seemed like the team had been touched heavily by the criticism and breathed a sigh of relief after their win against Papua New Guinea, but the real test begins on Sunday. 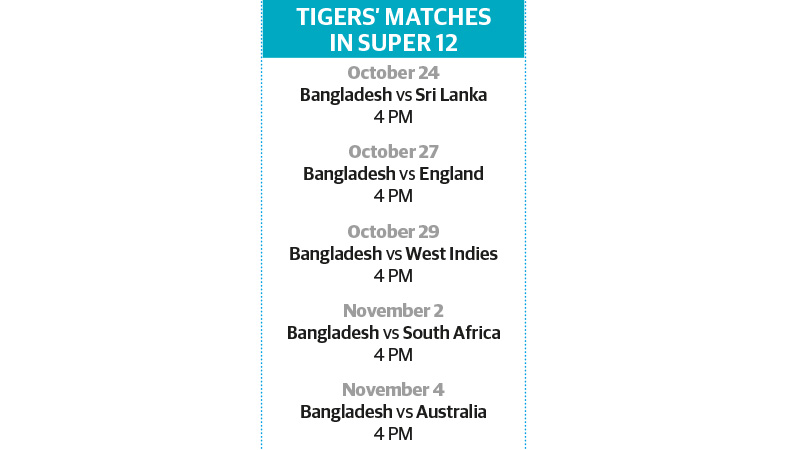 Bangladesh will take on Sri Lanka in their first game of the Super 12 on Sunday, and then will face England, West Indies, South Africa and Australia on October 27, 29, November 2 and 4.

Bangladesh must now shed away all their doubts from the defeat against Scotland and take on the Super 12 as a do-or-die scenario to make sure that they can gain victories in the main stage for the first time since the inaugural edition in 2007.

Mahmudullah said that they are looking forward to the challenges in the Super 12 round. He said, “I think this win (over PNG) will give us a bit of confidence going into the Super 12. Hopefully, we can tackle the challenges there well.”

Mahmudullah and co can take a lesson from history as well, as the Tigers have a long history of coming back from difficult situations.

The most recent was in 2018 when Bangladesh won their first match of the Asia Cup in UAE but then lost consecutive matches against Afghanistan and India to find themselves on the brink of elimination. From there on, they beat Afghanistan and Pakistan to reach their third Asia Cup final of the decade.

They also got beaten by India in the first match of the 2016 Asia Cup but secured the final with three consecutive wins. That happened in 2012 as well, as they won consecutive matches to reach the final.

Also, Bangladesh’s first bilateral series win came through a comeback. Bangladesh lost the first two matches of the five-match series to Zimbabwe but then won three to seal their first-ever series win.

Bangladesh can also take inspiration from the 2016 T20 World Cup champions West Indies. The team were termed as ‘brainless’ by cricket commentator Mark Nicholas, and they were coming off problems with their board.

The then skipper Darren Sammy said after the final that it had really hurt them. He said, “To describe our team, who were defending champions two years ago, as guys with no brains is really out of order. This tournament, with all that happened before. The disrespect from journalists, from our own cricket board. That was out of order. The only way we could make a statement was by winning this tournament. When you see these 15 men playing out there with hunger and passion, it all stems from what has been boiling inside.”

Mahmudullah also echoed similar energy in the press conference after the PNG match, as he said they had been belittled from every aspect possible, including the media.

If they can find the zeal and achieve the goal they had put forth before leaving for the World Cup, it’s great news for Bangladesh cricket. If not, it will end as yet another false promise.

Nobody believes in the process: Mominul