The first and main congregation of the holy Eid-ul-Azha was held at 7:00am Saturday at the National Baitul Mukarram Mosque in the capital.

Worshippers performed their Eid prayers abiding by government-directed health instructions which included maintaining a social distance of at least three feet from each other.

A total of six Eid congregations are being held at the Baitul Mukarram Mosque celebrating the Eid-ul Azha.

The first Jamaat of the day, held at 7am, was conducted by Hafez Mufti Maulana M Mizanur Rahaman, senior Imam of the mosque. The second Eid Jamaat was held at 7:50am and the third one at 8:45am.

Maulana Mahiuddin Kashem conducted the fourth Jamaat which was held at 9:35am. The fifth Jamaat, conducted by Hafez Maulana Waliur Rahman Khan, took place at 10:30am. Maulana Muhammad Abdur Rab Mia will conduct the sixth and last Jamaat which is to be held at 11:10am.

The Eid Jamaat will not be held in the National Eidgah, adjacent to the High Court, and also in the historic Solakia Maidan. In the Dhaka University, the Eid Jamaat was held at the university central mosque – Masjidul Jamiya – at 8am. 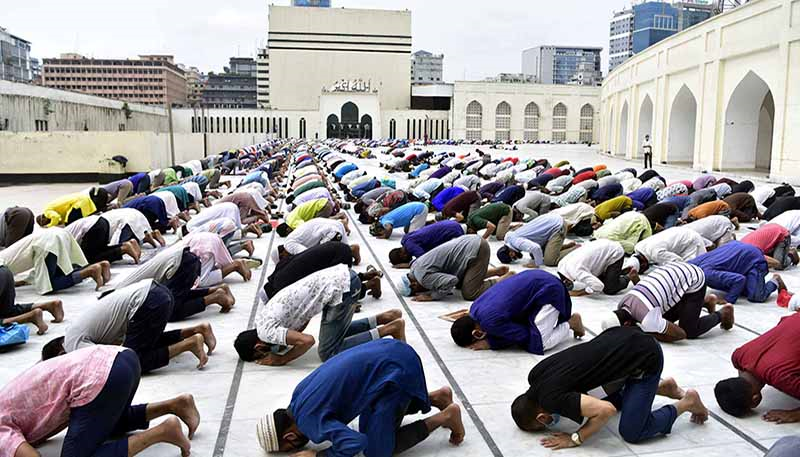 Another Eid Jamaat was also held at Dr Muhammad Shahidullah Hall Jame Mosque of the Dhaka University at 8am.

Organizers said adequate water supply and security arrangements had already been made at the Baitul Mukaram National Mosque to facilitate the Eid-ul-Azha prayers.

PM fulfilled all her commitments to nation: LGRD Minister